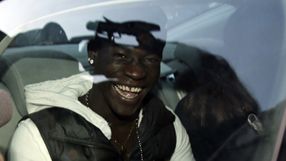 Balotelli, the hot-tempered forward who had been playing for Manchester City, is poised to sign for AC Milan, the club owned by the former prime minister vying for a political comeback.

The timing of the deal and its potential electoral implications were not lost on anyone, least of all Berlusconi's centre-left opposition.

L'Unita, the paper of the main centre-left party, said thrusting Balotelli into the campaign was "the devil's touch", a play on words because Milan's mascot is a red-and-black devil.

The paper said fans of the club, which won the Italian championship in 2011 but is now lying fifth in the first division, could influence about 1.3 percent of the vote.

Berlusconi's move less than a month before the February 24-25 vote is a Great Gatsby-style "grand gesture by the magnificent fool" who thinks money can buy influence, the paper said.

La Stampa newspaper calculated that Balotelli could be worth 400,000 votes. One Italian television station called the move Berlusconi's "ace up his sleeve".

The latest polls say the centre left will win but its lead over the centre right has narrowed significantly since December when Berlusconi, after changing his mind several times, decided to return to active politics.

Berlusconi's strategy is to weaken the centre-left as much as possible so his centre right could wield the most influence in the next parliament.

That is where the signing of "Candidate Mario," as one paper dubbed him, fits in, according to some commentators.

In order to sign Balotelli, Berlusconi had to do an about-face.

Berlusconi, who also owns a media empire, said this month that he did not want Balotelli because the player was a "bad apple" who could "infect" the atmosphere of a team.

He later apologised and the business of sport and politics took its course.

"After distancing himself from Balotelli, Berlusconi has decided to make him a stepping stone in his complicated political campaign," La Stampa said.

Balotelli's temper is notorious on and off the pitch but Italians still remember his starring performance in last year's European Championship, when his two stunning goals knocked out Germany in the semi-finals.

He was born in Sicily to Ghanaian parents and given up for adoption to an Italian family at the age of three. He grew up in northern Italy and became an Italian citizen at age 18.

"Balotelli is the son of the new Italy," said an editorial in Il Foglio, a political broadsheet whose editor was once a minister in a Berlusconi government.

The newspaper called Balotelli the "soul" of the type of populist Italy that Berlusconi wants the centre-right to represent.

The colour of Balotelli's skin, however, has not convinced some Italians that he is a son of the "new Italy".