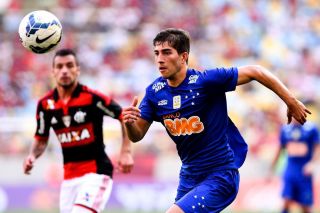 Real have been linked with a move for 21-year-old midfielder Silva amid reports of Sami Khedira's possible departure from the Spanish capital, with Arsenal and Chelsea rumoured to be admirers of the latter.

Silva has quickly become one of the hottest properties in Brazilian football, having emerged from Cruzeiro's youth team in 2012.

The Brazil youth-team international has been a regular for Cruzeiro in 2014, making 19 appearances as the defending Serie A champions sit top of the table.

And veteran Baptista, who spent three years at the Bernabeu, believes Silva has the quality to succeed in La Liga.

"It would be a wise move," Baptista told Marca of Real potentially signing Silva. "The first day I saw him I knew he was a player that would turn heads and I told him so.

"He's a two touch player, a quality that would fit right in Spain or the Premier League. In Brazil, players hog the ball, but Lucas plays it quickly.

"He is ready to make the giant leap to Europe and into a big club like Madrid, but he needs time to settle, because it's not an easy club.

"But in terms of footballing ability, there's no doubt he'd fit in very nicely at Real Madrid. He's a player brimming with talent."