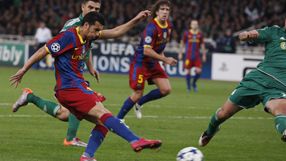 After Djibril Cisse had missed an early opportunity for the hosts, Barcelona broke the deadlock in the 27th minute with Rodriguez converting Daniel Alves's threaded pass.

Second-half goals from Lionel Messi, who netted for the 10th game in succession for club and country, and Rodriguez sealed a comfortable win for Josep Guardiola's side, who remain top of Group D with 11 points.

Panathinaikos seemed content to watch their opponents weave their magical passing patterns in the first half and wait for a chance on the counter.

It was a ploy which almost worked as newly-appointed Panathinaikos captain Cisse should have opened the scoring when he was sent clear by Lazaros Christodoulopoulos's superb pass. The Frenchman was denied by a smart save from Valdes.

Barca continued to press forward, and the hosts' diligent backline was finally undone by Alves, who played in Rodriguez.

Keeper Alexandros TzorvasTzorvas was then called into action twice in the space of a minute before half-time for saves from Rodriguez and David Villa.

The Greens' goalkeeper continued to do his best to thwart Barca and Adriano in particular after half-time, acrobatically palming to safety two powerful shorts from the Barca left-back.

But he could do nothing to deny Messi his sixth Champions League strike of the season two minutes after the hour mark as the Argentine bundled home a pass from Adriano and good work by Andres Iniesta.

Iniesta was the provider of Barca's third goal, sending over a left-wing cross which was converted from close range with consummate ease by Rodriguez to seal an impressive win.

Guardiola praised his goalkeeper Victor Valdes, who made an impressive save on a one-on-one with Cisse.

"Valdes made a fantastic save to stop Cisse, he is a great player who never disappoints us," said Guardiola, whose team face Real Madrid in the El Classico derby next Monday.

"It was important that we raised our performance in the second half, we played a good passing game and we scored good goals. We are in very good shape right now but this doesn't guarantee success. Every game is different, and I expect the match against Real to be a different proposition."