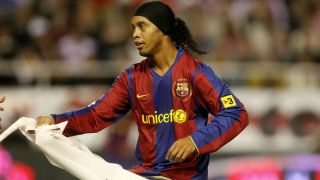 Brazil legend Ronaldinho rejected claims that he has lacked competitiveness throughout his career, highlighting his many achievements in football as the counter argument.

Ronaldinho is considered to be one of the most naturally gifted players to have played the game, winning major honours with Barcelona and AC Milan, while also enjoying plenty of success in his homeland.

His flamboyant style delighted fans across the globe and earned Ronaldinho the World Player of the Year moniker on two occasions.

However, the 2002 World Cup winner has been accused of a lack of focus at times and has been labelled somewhat of a party boy.

But Ronaldinho defended his record, telling Marca: "I started at Gremio and won titles, the same at PSG and at Barca I won everything.

"I went to Queretaro [in Mexico] and for the first time in their history they reached a final.

"At Flamengo we went seven months without losing a game, then Atletico Mineiro won their first Libertadores Cup during my time at the club.

"I think I've been very competitive."