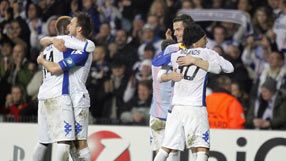 The result on a chilly night in the Danish capital meant Barca missed a chance to qualify for the last 16 and coach Pep Guardiola had some uncharacteristically sharp criticism for his Copenhagen opposite number Stale Solbakken after the game.

The pair had a spat on the touchline at the final whistle and the bald-headed Solbakken had to be restrained after Spain midfielder Sergio Busquets shoved him away from his coach.

Barca's prolific Argentina forward Lionel Messi had put the visitors ahead in the 31st minute at the Parken Stadion, netting his fifth of the competition with a rare right-foot shot that Johan Wiland could only palm on to a post and in.

The hosts were level a minute later when Wiland's opposite number Victor Valdes deflected a Jesper Gronkjaer cross into the path of Claudemir and the midfielder volleyed into the net with the ball taking a slight deviation off defender Eric Abidal.

Barca came close to securing the win that would have sent them through when substitute Pedro hit the post with a curled effort from the corner of the penalty area in stoppage-time.

They top the group on eight points and Copenhagen are second on seven with four of six matches played. Rubin Kazan and Panathinaikos, who drew 0-0 in Russia, have three and two respectively.

Bad blood had boiled up between the two sides after Barca goalkeeper Jose Manuel Pinto tricked Copenhagen player Cesar Santin into believing he was offside in their match in the Catalan capital last month.

The Danish champions, who lost the game 2-0, made a formal complaint to European soccer's governing body UEFA over the incident and Pinto was banned for two matches.

The normally mild-mannered Guardiola took exception to comments from Solbakken suggesting Pinto's punishment was not harsh enough and the dispute spilled on to the pitch at the final whistle.

"Ask him (Solbakken) what happened, he knows how to manipulate the media very well," the Barca coach said in a television interview. "I think he has behaved very badly in this situation."

Buoyed by their vocal fans, a motivated Copenhagen made a robust start to the game, rocking the 2009 winners back on their heels.

Barca central defender Carles Puyol needed treatment inside the first minute after he was caught across the face by Christian Bolanos.

Before the Spain international made it back on to the pitch, Copenhagen midfielder Claudemir smashed a long-range effort off the outside of the post.

Copenhagen maintained their intensity throughout the match, preventing Barca from settling into their usual dominant passing game.

The dangerous Messi had a couple of decent chances to add to his tally but the home players worked tirelessly to restrict his space around the centre of the pitch and to close down playmakers Xavi and Andres Iniesta.