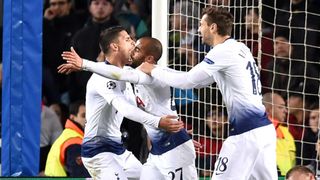 Lucas Moura came to Tottenham's rescue with a late equaliser to secure a dramatic 1-1 draw at Barcelona which sent them through to the Champions League last 16 at the expense of Inter.

Mauricio Pochettino's men needed to at least match Inter's result at home to PSV and they looked to be heading into the Europa League, but Lucas struck five minutes from time to turn the situation on its head and send Spurs through as Group B's other match also ended 1-1.

In a week which he has been accused of turning up late to training, Ousmane Dembele seemed switched on earlier than anyone else with his seventh-minute opener.

Spurs crafted a host of chances after the break and, just when it looked as though they were never going to find a way past Jasper Cillessen, Lucas – a 71st-minute replacement for Son Heung-min – found the net to complete a great escape.