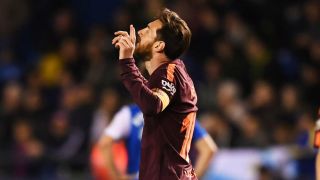 La Liga is over. Barcelona have won. Lionel Messi is untouchable. For some, it is the same old boring story.

The Catalans' 25th top-flight crown, secured with a 4-2 win against Deportivo La Coruna on Sunday, has involved not so much a race but a 10-month victory parade.

They have been top of the table since matchday three and are 11 points clear, with a goal difference of 66. They are on the brink of the first unbeaten season since Athletic Bilbao in 1930.

Crucially, they have had Messi in the kind of form that has left opponents practically giving up before setting foot on a pitch. Somehow, it has invoked as many yawns as cheers.

It is nothing new, of course. Manchester United great Paul Scholes, who quit football for a while after facing Messi in 2011, detected something dull about the Argentine four years ago. "His achievements put him in a different category to the rest of us who played the game," he wrote in The Independent. "But even so, in him, as much as anyone, I detected that mood of boredom." Even the blonde hair phase did not last long.

There have been written debates over whether Messi and Barca had become boring under Ernesto Valverde. The issue was even put to the head coach in September, after they won their eighth game in a row against Sporting CP. "Everyone is free to say what they want," he replied. "I don't get bored – especially not when we win."

Poor Valverde. If he had been in the job for longer, perhaps he would see what we spectators, in our infinite wisdom, have come to realise. How tiresome it is, for instance, that Messi has more goal contributions this season than any other player in Europe (43 scored, 18 assisted). How tedious it has been to watch him snatch results almost entirely of his own volition, against Atletico Madrid, Deportivo Alaves (twice), Espanyol, Las Palmas, Real Sociedad and Sevilla, when a hamstring injury meant he could barely walk. How we have all groaned when he ambles up to free-kicks and whips the ball into the net; or when he set up a goal in the Clasico after losing his boot, having refused to stop and put it back on, like a normal human being.

That is the thing with Messi: he is not normal. He is a very long way from the everyday. And he has done it for so long that we now accept his brilliance as commonplace. Like a Roger Federer forehand or LeBron James layup, the magical becomes the mundane when Messi is involved.

We expect goals, we expect wins, and, for some, nothing breeds boredom like the expected coming to pass. The reaction to Barca's spectacular Champions League collapse against Roma, when Messi finally had an off day, highlighted as much.

If we have been spoiled by watching him, Valverde must take his share of the blame. This season, he picked up the tattered remains of a Barca team destroyed by Real Madrid in the Supercopa de Espana and turned them into a points-hungry behemoth. A solid defence and midfield let Messi take up a central free role, where he has been devastatingly predictable in being predictably devastating.

Luis Suarez, meanwhile, has transformed into the ultimate defence-stretcher, a striker who makes so many runs off the shoulder of the last man that he looks like a throwback to a playground goal-hanger, a Filippo Inzaghi on concentrated Yerba mate. It has given Messi all the time and space he could want to dictate matches, with 90 minutes running according to his tempo, suffused with his humdrum magic. He is the world's most captivating metronome.

3 - Luis Suarez is the first player to assist Lionel Messi for three goals in the same game in all competitions. Friends. April 29, 2018

Another domestic double is an achievement to celebrate, even after that horror-show in Rome, but the World Cup remains the Messi litmus test. As long as he has not lifted the game's ultimate prize, he will be discredited, his detractors apparently forgetting that two half-decent finishes from Gonzalo Higuain would have made Argentina world and South American champions in the last four years.

In 2014, he headed to Brazil a disheartened figure. Barca had lost the title race to Atletico on the last day, having been knocked out of the Champions League by the same opponents, and then suffered defeat to Madrid in the Copa del Rey final. This year, he approaches the global stage after a return to normality, to undisputed, spectacular dominance.

After his triumphs this season, glory in Russia could end the debate on who is the best footballer in history. Trust Messi to take the fun out of that, too.