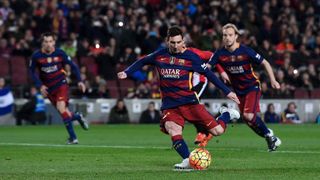 Barcelona extended their dominant La Liga record against Athletic Bilbao with a crushing 6-0 victory over the 10-man Basque side at Camp Nou on Sunday.

Goalkeeper Gorka Iraizoz saw red after just four minutes for bringing down Luis Suarez and, after Lionel Messi drilled home the resulting penalty, Barca's 12th win in 12 against the Basque side never looked in doubt.

Neymar added a second before setting up Suarez for a third just after half-time, and some magic from the Brazilian handed Ivan Rakitic an unmissable chance to make it 4-0 just past the hour mark.

Suarez bagged the fifth from close range and headed home a late sixth to secure Barca's biggest win of the league season so far.

The only potential blemish for Luis Enrique's title-holders was the withdrawal of Lionel Messi at half-time, the Argentina star reportedly suffering from pain in his right hamstring.

Athletic coach Ernesto Valverde made changes in the second half as he looked to rest players for the Copa del Rey clash with Barca this week, while Luis Enrique's side moved back to within two points of Liga leaders Atletico Madrid, having played one game less.

Eraso had the chance to hand Athletic the perfect start after Iker Muniain cut out Gerard Pique's pass back to Claudio Bravo, but he could only fire over the crossbar with the goal gaping.

The visitors were dealt a killer blow with just four minutes played as Iraizoz was sent off after bringing down Suarez just inside the area. Muniain led the protests before the midfielder was sacrificed for replacement goalkeeper Iago Herrerin, who could not reach Messi's spot-kick, which flew into the bottom corner.

Bravo was alert to deny Oscar de Marcos as he raced in behind Jordi Alba, Athletic responding positively. But Neymar put Barca in control with half an hour played, taking Suarez's pass into his stride before chipping beyond Herrerin and into the far corner.

Messi was replaced at the break but Neymar wasted little time in turning provider for number three, sliding the ball through to Suarez, who beat the offside trap before slotting beneath Herrerin from 12 yards.

Athletic were perhaps fortunate not to be reduced to nine men after Etxeita planted a deliberate forearm into Suarez on a Barcelona break, but they found themselves four goals down on 61 minutes.

Moments after Eraso chipped over the bar from close range on a rare break for Athletic, Neymar's spectacular run took him into the area before he pulled back for Rakitic to slot home through the legs of Herrerin.

Suarez made it five as he chested down substitute Ardan Turan's ball into the box before prodding in a low finish from close range.

Barca then suffered a second injury concern as Jordi Alba was forced off on 69 minutes, the fullback having pulled up in discomfort when stretching for the ball.

Neymar fizzed a free-kick just over the bar with time running out and Barca got their sixth as Suarez head home Sergio Busquets' cross from the right to seal an emphatic win in the 82nd minute, the Uruguayan netting his 29th goal from 29 appearances in all competitions this season.

-Luis Suarez has scored more goals than any other player in the top five European leagues (29, all competitions).
-Lionel Messi has scored in each of his last seven appearances at Camp Nou (11 goals, all competitions).
-Only Mesut Ozil and Henrikh Mkhitaryan (16 apiece) have had more assists than Neymar (14) this season (top five leagues, all comps).
-Barcelona have won more penalties than any other side in the top five European leagues this season (10).
-Neymar has assisted Lusi Suarez's five goals in la Liga this season, the joint-highest combination alongside Roberto Soldado and Cedric Bakambu.
-Barcelona have recorded their biggest win in a competitive game this season (6-0, all competitions).
-Gorka Iraizoz is the first Athletic goalkeeper to have been sent off in a La Liga game since Daniel Aranzubia in 2004 (in the derby vs Real Sociedad).
-Iraizoz's red card was the quickest in La Liga this season (fourth minute).
-Arda Turan has made two assists in two league games for Barcelona.