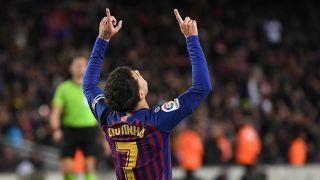 Philippe Coutinho scored twice as Barcelona produced a brilliant comeback in the second leg of their Copa del Rey quarter-final against Sevilla, a thumping 6-1 win sealing a last-four place.

Sevilla, beaten in the final by Barca in two of the past three years, deservedly won the first leg at home 2-0 when Ernesto Valverde's decision to rest captain Lionel Messi backfired badly.

Messi was back in the team for Wednesday's return at Camp Nou and he inspired a dramatic comeback that saw Ivan Rakitic and Sergi Roberto add to Coutinho's well-taken brace before Luis Suarez and the Barca captain himself compounded Sevilla's misery.

Before Messi and Suarez made sure of Barca's progression, Guilherme Arana - after a VAR review for a penalty at the other end - had set up a grandstand finish, while Ever Banega having a first-half penalty saved by Jasper Cillessen proved a key moment in the second leg.

Barcelona have won the Copa del Rey in each of the last four seasons and the LaLiga leaders are on track to make it five in a row after a stunning performance.

Coutinho's error contributed to Sevilla's second goal last week but he gave Barca a 13th-minute lead when Quincy Promes' challenge on Messi resulted in a penalty the Brazilian stroked home.

Barca were grateful to Cillessen for two big saves in close succession, as he magnificently pushed Andre Silva's flicked backheel on to the post, then dived to his left to keep out Banega's poor penalty after Gerard Pique bundled over Roque Mesa.

The tie was all-square in the 31st minute when Arthur's sensational pass sent Rakitic clear for a delicately poked finish the former Sevilla midfielder refused to celebrate scoring.

The capitulation from Sevilla - thrashed 5-0 by Barca in last year's final - was seemingly completed 103 seconds later by Roberto's rifled first-time finish from a deflected Messi pass.

But after Coutinho had a penalty appeal for a handball against Daniel Carrico rejected, Sevilla went down the other end with Arana hammering a drive past Cillessen's grasping fingertips, although there was a VAR check before awarding the goal.

In a frantic finale Sevilla could not find the second strike they needed to progress on away goals and, with the visitors over-committed, Suarez finished off a rapid break before Messi atoned for a pair of remarkable misses with the clincher.

1 - @JasperCillessen has saved the first of his 20 penalty shots faced in his professional career on the Top Flight (only clubs). Vital pic.twitter.com/JqnSXb26xp— OptaJose (@OptaJose) January 30, 2019