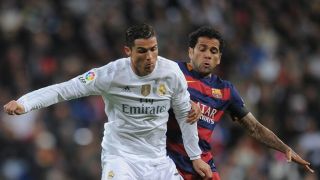 Barcelona and Real Madrid players dominated the 2015 FIFPro World XI, which was announced at the Ballon d'Or ceremony in Zurich on Monday.

Barca and Madrid both had four representatives, while Juventus – who were runners-up in the 2014-15 Champions League – had one, along with Bundesliga champions Bayern Munich and Ligue 1 winners Paris Saint-Germain.

No current Premier League players made the cut for the award, which is voted for by professional players from all over the world whose national associations are FIFPro or candidate members, with over 45,000 ballots sent out.

El Clasico rivals Lionel Messi and Cristiano Ronaldo made the XI for the ninth time in their respective careers, while Andres Iniesta became the outright third-best performer in the award's history by being named to his seventh team.

Manuel Neuer is selected as goalkeeper for the third consecutive year as he keeps his place from the 2014 FIFPro World XI along with Thiago Silva, Sergio Ramos, Iniesta, Messi and Ronaldo.

Barcelona striker Neymar, Real Madrid midfielder Luka Modric and Juventus star Paul Pogba are named to the team for the first time, but Barca's Luis Suarez is still waiting for a debut selection, as are Madrid duo Gareth Bale and James Rodriguez.