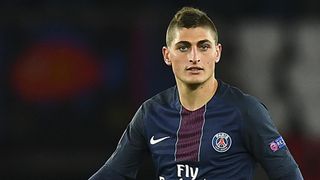 Paris Saint-Germain midfielder Marco Verratti has launched a defence of Ligue 1, insisting Barcelona and Real Madrid would not romp to 5-0 wins like they do in LaLiga if they played in France.

Verratti has been at PSG since 2012 and feels their league does not get enough credit compared to the other representatives of Europe's top divisions.

The Italy international thinks the competitiveness and physicality of Ligue 1 are impressive factors and cast doubt over whether Barca and Madrid could dominate if they played in the same league.

"In France, especially, it is even more difficult against teams who are a little lower in the standings as these teams are often compact and difficult to play against," Verratti wrote in his column for Goal.

"In the other championships, it's a little different. In Spain, for example, an average team that faces Real Madrid or Barcelona will forget the opponents and play football. They are used to a more open, less defensive game.

"This is the reason why it is easier for Real Madrid or Barcelona to score five or six goals. I'm not sure they could score as much in France - especially away.

"I like this way of playing, as the Spaniards do, but it is more difficult to find spaces in France.

"Ligue 1, our championship, is criticised abroad but also too often in France. The championship has evolved in recent years - in the right direction.

"I didn't know too much about it when I arrived. I knew Lyon well because they had great players but I've really learned about the other teams now and I can tell you that it is a very difficult championship.

"If you are not concentrating in a match you can lose against anyone. I remember our first matches with Carlo Ancelotti; we did not win much, we often had draws. It was a bit of a surprise for me as I didn't think we would have trouble like that.

"This is very different from Italy where the game is very tactical. Ligue 1 is much more physical."

Verratti believes the progress being made by French clubs in Europe is another indication of the league's strength.

He added: "To defend Ligue 1, you should look at the results in the Champions League.

"Monaco are first in their group, Lyon can still qualify and they are only fourth in the championship. I saw the Lyon matches against Juventus and they matched them.

"In England, there is often a show on the pitch. In Germany, the crowd is important. In Italy, everything is about tactics and in Spain it's technique. I think the word that best describes Ligue 1 is physical."