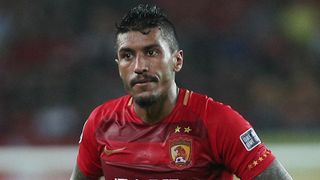 Barcelona thanked Paulinho for his service to the club while confirming his season-long loan to Guangzhou Evergrande, who have a mandatory purchase option for the Brazilian midfielder.

The 29-year-old, who signed from the Chinese Super League side last August, scored nine goals in 21 LaLiga starts during a successful season at Camp Nou in which Barcelona won a LaLiga and Copa del Rey double.

In returning to Guangzhou, he has the opportunity to build on his record of 24 goals in 88 appearances for the Chinese Super League side, who he first joined from Tottenham in 2015.

A statement on Barca's official website read: "FC Barcelona and Guangzhou Evergrande have reached an agreement for the loan transfer of Paulinho Bezerra for one season, with a mandatory purchase option for the Chinese club.

"Barca publicly expresses its gratitude to Paulinho for his commitment and dedication and wishes him luck and success in the future."

Paulinho helped Guangzhou to two league titles during his first spell at the club.