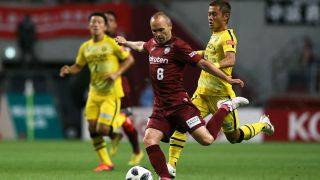 Andres Iniesta sees himself as a coach in the future but is not fixated on taking charge of Barcelona.

Spain and Barca great Iniesta ended a career-long association with Camp Nou earlier this year when he joined J-League side Vissel Kobe for the final chapter of his playing days.

He won nine LaLiga titles and four Champions Leagues with the Blaugrana and envisages passing on those experiences in some capacity once he hangs up his boots.

"I do not know what the future will hold. I would not say that I would not like to be a Barca coach but I cannot say it's something I'm thinking about," the 34-year-old told Mundo Deportivo.

"Yes, it is true that with the passage of time, I will wake up the vision of being a coach. [That is how] I see myself but I guess when I leave football everything [can be] different. We will see what way it is.

"I would like to come back here [to Barcelona]. I feel at home and in the future I hope I can convey what I have learned and what I have felt and feel for this club."

The superstar forward will be 32 next year and Iniesta believes he is capable of dropping back into a midfield role in the latter days of his career.

However, as Messi's phenomenal goal return continues, he does not feel there should be any rush to change things.

"Messi can do what he wants. In any position he could be the best," Iniesta added.

"There are very specific demarcations in the centre of the field that perhaps are more positional, of a different typology than what Leo is.

"But he could play where he wanted to, because he is the one with the most goals. The important thing is that he keeps doing it and that he plays as he likes."