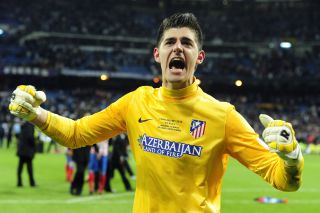 Courtois has flourished on loan at Atletico Madrid during the past two seasons and has made a promising start to the new campaign.

And Rosell told Spanish radio station Cadena SER that he would potentially be interested in bringing the Belgium international to Camp Nou, but his initial focus is on retaining Valdes.

The 31-year-old's contract is due to expire at the end of the season and he has previously announced that he will leave the club, however, Rosell has not given up hope of persuading him to stay.

"(However) we will try and convince him (Valdes) until the end (of his contract)."

Courtois has yet to make an appearance for parent club Chelsea, but with his continuing development it is unclear whether they would entertain the idea of selling him.