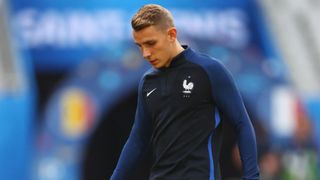 Barcelona have confirmed that new signing Lucas Digne had surgery on Wednesday - the day that his transfer from Paris Saint-Germain was announced.

The 22-year-old has agreed a five-year deal with the LaLiga champions, after a transfer fee that could rise to €20.5million was agreed with Unai Emery's side.

Digne, who will sign his contract and be presented to fans on Thursday, arrived for an early medical in the city sporting heavy bandaging to his nose and face.

Barca confirmed that the France international "underwent a rhinoseptoplasty yesterday to amend an old nasal fracture", though his medical checks are not expected to be affected.

Digne is Luis Enrique's third signing of the transfer window, following the €25m arrival of compatriot Samuel Umtiti and the return of Denis Suarez to Camp Nou.