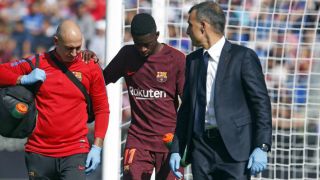 Barcelona president Josep Maria Bartomeu says there are no plans to make further signings in January despite Ousmane Dembele's injury.

The France international suffered a tear in his hamstring in the 2-1 LaLiga win at Getafe on Saturday and flew to Finland on Monday to undergo surgery.

Dembele –  who cost Barca a club-record initial fee of €105million last month, is not expected to be fit again until at least the beginning of next year – which has prompted suggestions they could look to bring in reinforcements in the next transfer window.

Paris Saint-Germain's Angel Di Maria was linked with a move in August, while the Catalans have been tipped to renew their attempts to sign Philippe Coutinho from Liverpool.

However, Bartomeu believes Dembele could return in the early part of the new year and has ruled out any signings.

"There are no plans for the winter market," he told TVE. "[Dembele] will be back and he will show us all what we have already seen.

"I have spoken with him, he's affected, but that's normal. He told me he knows everything will be okay, though, and that he's in good hands. By Wednesday or Thursday, he will be back in Barcelona.

"He could return in January, I hope so because that would represent a nice present for all Barcelona fans on Three Kings Day [January 6]."

Valverde: "We can't look back or feel sorry for ourselves. Between all of us, we will help as much as we can" September 18, 2017

Bartomeu went on to praise the performances of Lionel Messi, who has scored eight goals in seven games in a blistering start to the season.

The 54-year-old sought to calm fears about the Argentina star's future last week, insisting his new contract has already been signed, despite concerns that the club have yet to officially process the new deal that was agreed in July.

When pressed again on the issue, Bartomeu said: "The contract's been signed by his father, by his foundation… but it's lacking one signature and the photograph, but we will do that.

Bartomeu also said the team are delighted with head coach Ernesto Valverde, who has steered them to five wins in a row in all competitions since the Supercopa de Espana loss to Real Madrid.

"We're starting a new era with him and we have a lot of faith in him," he said. "He's smart, he believes in Barcelona, in our system. He manages the games well and he's not disappointed us.

"The players are delighted with him. He's earned the esteem of all Barcelona fans in just a few weeks. Things are going really well in LaLiga and the Champions League."