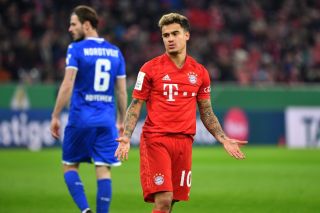 Philippe Coutinho was long touted for a move to Barcelona, which finally came to fruition in January 2018. But two years down the line, they’re willing to sell their record signing at a substantial loss.

According to Mundo Deportivo, the Brazilian playmaker could be available for €80million, which is €40million less than they originally spent on bringing him to the Nou Camp.

Although Barcelona went on to win La Liga and the Copa del Rey just months after Coutinho joined, his form tailed off considerably in his first full season at the club.

He was in and out of the starting line-up, contributing just five goals and two assists in the league. It was an underwhelming return for a player on whom so much money and expectation had been staked.

Coutinho had been bewitching at Liverpool, who were reluctant to let him leave, but used the proceeds from his sale to wisely reinvest in the squad.

They haven’t missed his mercurial talents as a front three of Roberto Firmino, Sadio Mane and Mohamed Salah has become one of the most feared in world football. They scored 69 goals between them last season in all competitions.

Coutinho joined Bayern Munich on a season-long loan back in August and although he’s shown glimpses of his undoubted ability, most notably when scoring a hat-trick in a 6-1 thrashing of Werder Bremen, he still hasn’t nailed down a starting spot.

Barcelona have accepted that Bayern are unlikely to exercise their option to buy the 26-year-old for the €120million they originally paid and are supposedly willing to accept much less.

In his absence, the Spanish giants have moved on, with teenage sensation Ansu Fati impressing from the left-wing, a position Coutinho often occupied last season.

Whether Liverpool would be interested in bringing their former star back remains to be seen, particularly after his relationship with the club’s supporters was strained by the manner of his departure.

Andres Iniesta exclusive: I pleaded with Pep Guardiola to stay true to beliefs at Barcelona