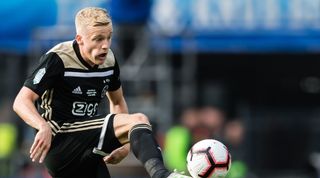 The 22-year-old attacking midfielder was one of the standout performers in the Dutch side’s surprise run to the semi-finals of the Champions League.

Their hopes ended with a heart-breaking last-minute Spurs winner that completed the Premier League side’s miraculous second leg comeback and eliminated the Amsterdam club on away goals.

Van de Beek’s team-mate Frenkie de Jong has already agreed a move to Barcelona, while Matthijs de Ligt has been tipped to follow him out of the door.

Now El Mundo Deportivo reports that the Catalan club could be interested in a summer swoop for a third Netherlands international, harking back to the summer of 1988 when they brought in three Real Sociedad players.

Borussia Dortmund are also interested in Van de Beek, who has scored 17 goals in all competitions this season.

QUIZ! Can you name the 28 players with most fouls in the Premier League this season?