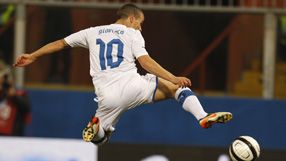 The 25-year-old Italian attacking midfielder, who is part-owned by Juventus, has been strongly linked with a move away from the Crociati at the end of the season.

The diminutive forward never really broke into the ranks at Juventus but has been in superb form for Parma, scoring ten times in 28 appearances this campaign and his good form as not gone unnoticed.

"I know that Barcelona has followed (Sebastian) Giovinco for some time," the player’s agent Antonio D'Amico told Sportal.it.

"That a club like Barcelona shows an interest in him gives us great pleasure.

"Giovinco is an important player, he is talented, technically gifted and it's normal that clubs are interested in him."

It remains to be seen where in Pep Guardiola’s side he would fit in given the wealth of attacking options the Barca head coach has at his disposal in Lionel Messi, Alexis Sanchez and Pedro, not to mention the returning David Villa.

Nonetheless, his technically-gifted playing style would be perfectly suited to the Barcelona set-up.

"He is doing really well and he will play at Euro 2012," D'Amico added, and a solid showing at this summer’s championships could increase his market value.

"As (Italy coach Cesare) Prandelli has stated, he is one of the most talented players in Italy and the European Championship will give him an opportunity to showcase his talent."