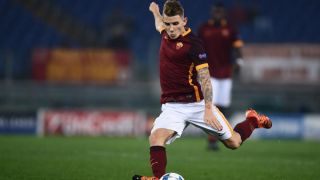 Barcelona have announced the signing of full-back Lucas Digne from Paris Saint-Germain for a fee which could rise to €20.5million.

The 22-year-old, who spent last season on loan with Roma, has agreed a five-year contract with the Liga champions, who have shelled out an initial €16.5m to secure his signature.

"Barcelona have reached an agreement with Paris Saint-Germain to sign French player Lucas Digne for the next five seasons," a Barca statement confirmed.

"Barca have paid an initial 16.5 million euros with another four possible according to individual and team results. Digne's buy-out clause is 60 million euros.

"Lucas Digne will arrive in Barcelona on Thursday early in the morning local time to undergo a medical and sign his contract."

Digne becomes the second defender to complete a move to Barca this week, following the confirmation of Samuel Umtiti's €25m switch from Lyon.

He is expected to compete with Jordi Alba for the left-back spot, meaning Adriano is likely to depart Camp Nou, with Lazio having been linked with a bid.

Digne made 32 starts in Serie A last season and impressed enough to earn a place in France's Euro 2016 squad, though he failed to make an appearance.

Liverpool had been rumoured to have made an enquiry for the former Lille youngster, after Roma passed on the opportunity to sign him permanently from PSG.