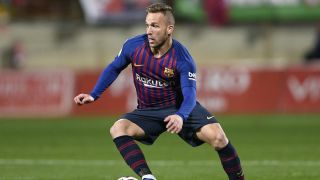 Arthur is determined not to let praise from Barcelona legend Xavi go to his head after making a fine start to his Camp Nou career.

The Brazil international has transitioned effortlessly into the Spanish side's midfield since joining from Gremio for an initial €31million fee.

By their own lofty standards, Barca have not been at the peak of their powers in LaLiga this season, though they still lead the way by one point after 12 matches.

Arthur's standout performances have earned far-reaching praise, including from Barca icon Xavi, yet the 22-year-old is keeping his feet firmly on the ground.

Speaking to Globo Esporte, he said: "To receive praise from a player who I was a huge fan of is a massive confidence boost for me, but I have to know how to deal with any praise I get.

"I can't let it go to my head. I feel very lucky to have my family to guide me through the difficult times.

"That's why I brought them all with me to Barcelona because moving to Europe was a big change in my life."