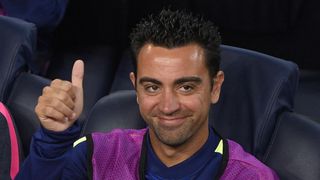 The Brazilian midfielder shone on his first appearance for the Catalan giants, scoring a fine goal in the International Champions Cup against Tottenham on Saturday.

Barcelona boss Ernesto Valverde praised Arthur's display and fellow midfielder Rafinha was also impressed by the 21-year-old, who has joined from Gremio.

"I don't like to make comparisons usually, but he has a touch of Xavi about him," Rafinha said after Barca beat Spurs on penalties in Pasadena.

"It's the way he touches the ball, the way he passes it. He's a great, great signing for Barcelona."

Arthur was not expected to join Barca until January but the LaLiga champions were able to bring the deal forward, much to the uncapped midfielder's delight.

"It's a dream to be here," Arthur said. "I have worked hard for this and fortunately now I am here.

"I am really happy. I want to work hard to be able to give my best.”

"I am happy for my goal and for the result."

"He's a great player," added Rafinha, who was on loan at Inter last term.

"He unbalances defenders, he's great one on one, I expect a lot from him."