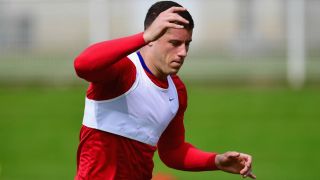 Antonio Conte believes Ross Barkley could be ready to make his Chelsea debut next week in the FA Cup third-round replay against Norwich City.

Barkley, who joined Chelsea from Everton last week, is still recovering from a hamstring injury that has prevented him from making a competitive appearance this season.

"He is working very hard and I think that maybe the next game against Norwich, he could be available, in contention," said Conte at a news conference on Friday.

Conte also provided an update on the future of Baba Rahman, after Schalke confirmed they were in talks over a loan move for the full-back on Thursday.

"Baba is recovering from an injury and I haven't had the possibility to see him in training with us, only once or twice, but he wasn't ready to have a full training session with us," said Conte.

"Now he's recovering, I think that [Schalke] could be an interesting option for the player, to try to recover with them."

Conte says on Baba Rahman, who is recovering from a bad injury, that it could be an interesting option for him to continue that on loan at Schalke where he was previously.January 12, 2018

Chelsea face Leicester City in the Premier League on Saturday, with Conte wary of the threat posed by Claude Puel's side.

"I think Leicester is a really good team, a strong team in really good form and for us it will be very difficult," added the Italian, despite the fact the Foxes have won only one of their last seven matches in all competitions.

"Maybe Leicester is the worst team to face in this moment for us."