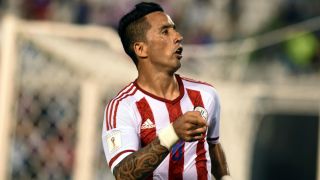 Barrios, who scored two goals at last year's Copa America in Chile, was included in Paraguay's provisional squad, having featured in World Cup qualifiers against Brazil and Ecuador in March.

However, there was no room for the 31-year-old Palmeiras attacker in the final 23-man squad ahead of the century edition of the tournament, which will kick-off in the United States on June 3.

Victor Caceres, Jonathan Santana, Osvaldo Martinez and Raul Bobadilla were also among 16 players culled, with Roque Santa Cruz and Paulo da Silva to lead the way for Paraguay next month.

Drawn in Group A, two-time champions Paraguay open their campaign against Costa Rica on June 4.

The Paraguayans clash with Colombia three days later before tackling host nation the USA on June 11.