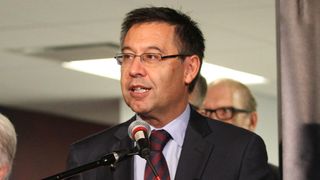 Barcelona president Josep Maria Bartomeu has hit back at criticism that the club's current board of directors are not staying true to their philosophy and is adamant they have no intention of stepping down.

There has been criticism of the way Bartomeu and his colleagues have run the club since taking charge in 2014, with the Catalans caught up in a number of scandals.

Barcelona have been involved in court cases over irregularities surrounding the transfer of Neymar from Santos in 2013, while they also received a transfer ban from FIFA following the illegal signing of underage players.

Nevertheless, Bartomeu remains unperturbed by recent events and believes the board has done a fine job leading the club.

"From some sectors the ability of this board to run the club has been put into question," Bartomeu said during his speech in front of the Barcelona senate.

"We have been accused of not protecting the model and of only being administrators. We do not mind, though, given how football is now. Being considered good administrators is praise.

"We are not losing the essence of the Barca model. I would like, when we speak of the model, that it was done seriously and not just focused on a style of play, which we obviously want to maintain as it is part of our very essence.

"I would prefer that we talk about the model of the club, something that develops, improves and enriches itself every day.

"We are still in the winning era that began with Ronaldinho and that [Lionel] Messi has consolidated. We have overcome the departures of Pep Guardiola and Xavi, the death of Tito Vilanova and the FIFA sanction.

"I will not resign and neither will the rest of the board."