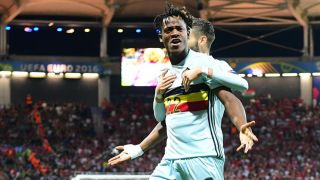 Chelsea defender Gary Cahill is confident that Michy Batshuayi will cope with the pressure of his price tag in his first Premier League season.

The 22-year-old Belgium international joined Antonio Conte's side this month for a reported fee of £33.2million, after just two campaigns in Ligue 1 with Marseille.

The forward scored twice in an 8-0 friendly win over Atus Ferlach during Chelsea's pre-season preparations in Austria, and Cahill says he has already seen enough to know his new team-mate is worth the transfer fee.

"Michy is going to be a big signing for us. He is a very exciting young talent," he told Standard Sport.

"I hope he won't be fazed by the fee or playing for a big club like Chelsea. There is no reason why he should.

"The manager has a game plan and I am sure he will fit into that nicely. He came back the same time as me last week and is still trying to find his fitness like I am and get more game time.

"But from what I have seen of him, he is impressive and Chelsea fans should be very pleased.

"Michy commanded the price tag because of the quality he has, it's as simple as that. He shouldn't have any problem with it, he just has to play the way that he can. He is a young lad who is learning the game.

"His talent makes it very easy for him to just drop into the team. He is also a laid-back guy off the pitch so hopefully that won't affect him."

Chelsea face Liverpool in the International Champions Cup in California this week.