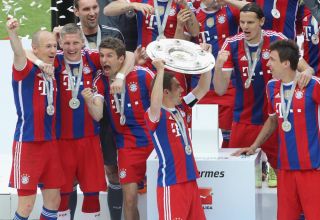 After the quadruple-winning campaign of 2012-13 under Jupp Heynckes, incoming boss Pep Guardiola had an impossible act to follow in his first season in charge.

However, the former Barcelona coach swept all before him - on the domestic front at least - as Bayern cruised to a successful defence of their league crown.

They managed it in some style, too, sealing the title with seven matches to spare before the end of March.

Of the 27 matches prior to securing the title, Bayern won 25 and drew two, and their unbeaten league run stretched to 53 games until a 1-0 loss at Augsburg in early April.

The bare numbers fail to do Bayern justice, with their devastating attacking play a thrill to watch at times.

That style came to the fore at the World Cup in Brazil, as a heavily Bayern-influenced Germany team clinched glory against Argentina at the Maracana.

The likes of Manuel Neuer, Philipp Lahm, Bastian Schweinsteiger and Thomas Muller were all prominent in that campaign and although compatriot Toni Kroos has since departed for Real Madrid, Bayern's squad looks to have too much depth to be seriously challenged by the other sides in the league.

Once again, Borussia Dortmund look the most likely candidates, although Jurgen Klopp will have to contend with the loss of top scorer Robert Lewandowski to Bayern.

Dortmund finished 19 points behind their rivals in May, and Klopp will need all of his inspirational powers if they are to bridge that gap this time around.

Schalke and Bayer Leverkusen occupied the remaining UEFA Champions League spots, the latter now under the guidance of Roger Schmidt after the departure of Sami Hyypia.

At the wrong end of the table, Hamburg will be desperate for an improved season after they almost lost their status as the only club to be ever-present in the Bundesliga.

Only saved from automatic relegation by the dismal end-of-season form of Nuremburg and Eintracht Braunschweig, Hamburg retained their top-flight status courtesy of an away-goals victory over Greuther Furth in the promotion/relegation play-off.

With experienced Bundesliga campaigner Mirko Slomka now set for his first full term at the helm, Hamburg fans will hope 2014-15 brings a season of consolidation.

New boys Cologne and Paderborn may be tipped to struggle, although both have been handed home fixtures to start, against Hamburg and Mainz - the latter of whom made the Europa League qualifying rounds this term.

The trio of Eintracht Frankfurt, Freiburg and Stuttgart all struggled in the bottom half, and were grateful to the poor records of the bottom three to not find themselves in more danger come the end of the season.

After narrowly avoiding relegation in 2012-13, Augsburg were just shy of the European places last time out and will be keen to build on that progress, while the likes of Hannover, Werder Bremen and Hertha Berlin will have to show greater levels of consistency if they are to improve on their mid-table finishes.

Hoffenheim were the great entertainers of 2013-14, with a combined 142 goals in their 34 matches but Markus Gisdol's men may have to sacrifice some attacking potency for the sake of greater defensive stability if they are to emulate the feats of Wolfsburg and Borussia Monchengladbach, who qualified for the UEFA Europa League.