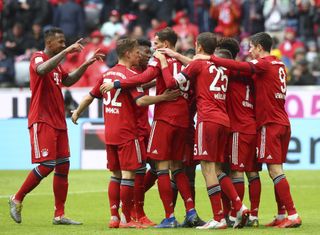 Bayern Munich edged nearer another Bundesliga title with a 3-1 victory against bottom club Hannover at the Allianz Arena.

Goals from Robert Lewandowski and Leon Goretzka put the reigning champions in control at the break but half-time substitute Jonathas reduced Hannover’s deficit from the penalty spot early in the second half.

However, any hopes of a surprise fightback were short lived as Jonathas, who was booked for dissent after scoring his spot-kick, was shown a second yellow card in the 55th minute after appearing to catch Joshua Kimmich in the face with his arm.

Bayern were able to coast thereafter and substitute Franck Ribery added a third goal late on.

The victory moved Bayern five points clear of second-placed Borussia Dortmund, who will be under added pressure to respond away at Werder Bremen in their game later on Saturday evening.

The hosts began brightly and were on the front foot straight away, looking dangerous down the right-hand side of the pitch. It was from that side that Kimmich whipped a pin-point cross into the box for Kingsley Coman but he put his header straight at the goalkeeper.

Michael Esser was called into action again after 15 minutes to smother another header from Lewandowski.

The Polish striker would not be denied much longer, however. When Kimmich got free down the right once more in the 27th minute he was on hand to power a header into the bottom corner of the net.

Esser made a couple of fine saves in quick succession to deny Thomas Muller and then Jerome Boateng but his resistance was broken once more five minutes before half time by Goretzka’s brilliant strike from the edge of the box.

Goretza should have put the result beyond doubt in first-half injury time but the Germany international defender somehow managed to scoop the ball against the crossbar from inside the six-yard area.

Hannover had offered little in the first half but they threatened to make Bayern pay for the miss when Jonathas, on at the break for Hendrik Weydandt, pulled a goal back from the penalty spot after 50 minutes.

The referee pointed to the spot after consulting VAR after Boateng was adjudged to have handled the ball.

Jonathas quickly turned into the villain, though, receiving two yellow cards in the space of five minutes to leave his team down to 10 men.

Bayern were now able to knock the ball around at will and make their numerical advantage count. However, Esser was still in good form and Thiago Alcantara was the latest to be denied by the Hannover goalkeeper, who then produced a superb save to thwart David Alaba.

Lewandowski and Goretza both went close midway through the second half as Bayern threatened a third goal, which eventually came with seven minutes remaining.

A nicely-weighted pass by Coman set Ribery free down the left side of the penalty area and he cut back on to his right foot to drive a low shot past Esser.

Lewandowski headed a late chance over the crossbar and Esser excelled again to deny the striker in injury time.