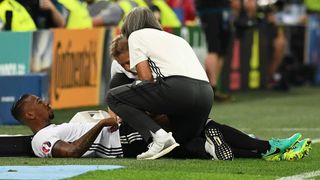 Bayern Munich expect Jerome Boateng to be fit for the new Bundesliga season after confirming he sustained a thigh injury in Germany's Euro 2016 semi-final defeat to France.

Boateng pulled up injured in the second half of the 2-0 defeat to Les Bleus and it was initially feared the centre-back would be missing by the time the champions face Werder Bremen in their season-opener on August 26.

However, the Bavarians - who will be coached by Carlo Ancelotti this season - are confident the 27-year-old will be ready in time to feature.

"A thorough examination following his return to Munich has confirmed the initial diagnosis: Boateng sustained a ruptured muscle bundle in his right thigh against France," a statement on Bayern's official website reads.

"However, the centre-back will be fit for the season opener."

Boateng made just 19 Bundesliga appearances last campaign as he missed the majority of the second half of the season due to a muscular problem.