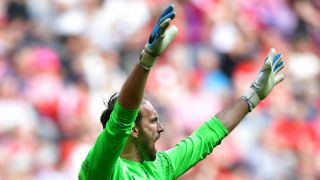 Tom Starke marked his first Bayern Munich start since March 2014 with a penalty save as Carlo Ancelotti's side celebrated their fifth successive Bundesliga title triumph with a 1-0 victory that consigned Darmstadt to relegation.

With Sven Ulreich having joined Manuel Neuer on Bayern's injury list, third-choice goalkeeper Starke was called upon for Saturday's clash at the Allianz Arena and proved his quality to deny former Bayern man Hamit Altintop from the spot late on.

Having won the league in style with a resounding 6-0 thrashing of Wolfsburg last time out, Bayern had little to play for, though Juan Bernat's 18th-minute effort all-but ended Darmstadt's slim hopes of survival.

A rather disjointed Bayern performance was reflected by some wasteful finishing from Ancelotti's men, and their bluntness in front of goal looked set to be punished when Bernat fouled Sven Schipplock with five minutes remaining.

It was Starke who proved to be the hero, though, his save finally confirming Darmstadt's relegation to the second tier.

Starke's counterpart Michael Esser was the busier of the two goalkeepers early on, the 29-year-old doing well to deny David Alaba and Rafinha respectively before Bernat put the hosts in control.

Esser had no chance as - after fine play from Franck Ribery - the former Valencia full-back prodded home from close range at the end of a slaloming run through Darmstadt's ramshackle defence.

10 – In the first half against Darmstadt, all 10 outfield players of registered at least one shot at goal. Variety. May 6, 2017

Muller almost had an assist to his name with a neat lay-off into Douglas Costa's path, but the winger's venomous first-time effort was deflected inches wide of the left-hand upright.

Bayern's leading scorer Robert Lewandowski had his first opportunity moments after the restart, his diving header from Rafinha's cross glancing wide off the woodwork.

Starke was finally called into action just after the hour, the veteran getting down well to parry away Patrick Banggaard's goal-bound header.

Lewandowski had another opportunity to extend his lead at the top of the Bundesliga scoring chart soon after, but Esser was out quickly to deflect the Poland striker's header over.

Bernat's clumsy foul handed the visitors a lifeline in the closing stages, but Altintop could not apply the finish from 12 yards as Darmstadt's two-year stay in the Bundesliga came to an end.