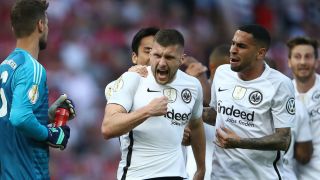 Jupp Heynckes' fourth stint as Bayern Munich head coach ended on a disappointing and controversial note as successor Niko Kovac led Eintracht Frankfurt to a 3-1 win in the DFB-Pokal final.

Veteran boss Heynckes won the treble before departing last time in 2013, but Kovac himself ensured that his Bayern reign will begin with the Bundesliga champions holding just one trophy - his side aided by a questionable late refereeing call.

Ante Rebic netted early in the first half and then struck again on the counter-attack eight minutes from time, after Robert Lewandowski had drawn Bayern level and before the drama escalated in stoppage time.

Frankfurt had ridden their luck to reach the closing stages still in a position to win the game and then, having seen VAR rule in their favour for Rebic's second, had referee Felix Zwayer to thank as he opted against awarding a Bayern penalty.

Kovac's men countered and sealed victory through Mijat Gacinovic, but the nature of the defeat will leave an especially bitter taste for Bayern and Heynckes.

Having ended the Bundesliga season with their title celebrations dampened by a home humbling at the hands of Stuttgart, the German champions head into the off-season - and Heynckes into the sunset - on a real downer.

A sublime early Lewandowski free-kick bounced away off the crossbar, but the opener arrived against the run of play at the other end after 11 minutes.

James Rodriguez was caught in possession and that allowed Kevin-Prince Boateng to set Rebic away, with a clinical 20-yard finish beating Sven Ulreich low to his right.

Bayern predictably rallied and Thomas Muller sent a clumsy header just wide, before the forward clipped in a pinpoint cross for Joshua Kimmich to nod narrowly past the opposite post.

A breathless break then moved through Muller and Franck Ribery to tee up Lewandowski, but he too could not steer on target. Muller also had another opening before the interval and shot straight at Lukas Hradecky.

Bayern's equaliser finally arrived following the restart, though, when Kimmich cut the ball back onto Lewandowski's toe and a last-ditch Omar Mascarell challenge succeeded only in wrong-footing Hradecky as the ball nestled in the net.

But it was Frankfurt who initially kicked on in search of a winner and Mascarell almost made amends, thundering a volley towards goal and drawing a parry from Ulreich.

The game began to really open up and, seconds after Mats Hummels directed a header against the crossbar, Rebic curled a low shot just beyond the far right-hand post.

And then Rebic struck again. The officials used VAR to wisely ignore appeals for handball in the build-up as another ball in behind took Rebic beyond Hummels to prod into the net and spark wild celebrations.

In scenes of high drama, Bayern then believed they should have been awarded a 94th-minute spot-kick when Boateng appeared to foul Javi Martinez. Instead, a corner was awarded and Frankfurt broke, with Gacinovic galloping into acres of space to seal his side's fifth cup triumph.