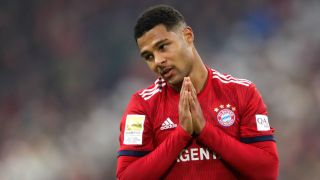 Lucas Holer's 89th-minute strike earned Freiburg a deserved 1-1 draw in a dramatic finale to their Bundesliga clash with Bayern Munich, putting the pressure back on Niko Kovac.

Bayern looked set to extend their winning run to five games courtesy of Serge Gnabry's effort 10 minutes from time, but Holer darted between Niklas Sule and Jerome Boateng to give the visitors a share of the spoils.

The Bavarian giants were jeered by the Allianz Arena crowd following a tepid first half in which Robert Lewandowski wasted a glorious opportunity to put them in front.

Gnabry appeared to have spared the Poland international's blushes, but Holer's clinical late finish meant Bayern fell four points adrift of leaders Borussia Dortmund, who beat Wolfsburg 1-0, and are now without a win in four home matches in all competitions.