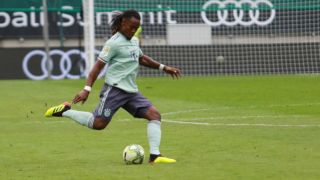 Renato Sanches scored a free-kick as Bayern Munich came from behind to beat Paris Saint-Germain 3-1 in the International Champions Cup.

Both sides were opening their ICC campaigns in Klagenfurt on Saturday and it was the Bundesliga side who came out on top in Niko Kovac's first game in charge.

Timothy Weah - son of George - opened the scoring for PSG in the first half, running on to a Kevin Rimane pass to finish well from inside the penalty area.

But three goals in 18 second-half minutes saw Bayern complete a fine comeback, Javi Martinez nodding in Arjen Robben's corner to get his side level.

Sanches then took advantage of suspect positioning from substitute goalkeeper Remy Descamps to curl in a free-kick and boost his chances of first-team action with Bayern, with teenager Joshua Zirkzee wrapping up the scoring.

Thomas Tuchel's PSG will have a chance to make amends against Arsenal in a week's time, while Bayern's next ICC game is against Serie A champions Juventus on Thursday.

PSG started on top despite Tuchel naming an inexperienced side, Adrien Rabiot's downward header forcing an early save from Sven Ulreich.

Gianluigi Buffon was soon rolling back the years at the other end, the veteran goalkeeper diving low to his right to turn away an awkwardly spinning first-time shot from Oliver Batista-Meier.

PSG took the lead in the 31st minute, Weah racing through to slot home past Ulreich.

But the goal owed plenty to Rimane's fine work, the defender seizing upon a loose pass, juggling the ball as he broke away and sending Weah clear with an excellent pass.

Christopher Nkunku impressed through the first half and he flashed a drive over the angle as PSG pushed for a second.

Bayern almost equalised in the first minute after the restart, but Sandro Wagner's header struck the crossbar, then Nkunku missed a fine chance by firing wide from Rabiot's low cross.

The Bundesliga side's second-half improvement told, though, Martinez heading in a right-wing Robben corner to level the scores with half an hour to play.

And Bayern took the lead with a cute free-kick from Sanches that caught out Descamps.

The Portugal international spotted the goalkeeper, who had replaced Buffon moments earlier, poorly positioned and whipped his 20-yard strike around the wall and in at the near post.

And the points were sealed when substitute Serge Gnabry burst away to set up Zirkzee for Bayern's third, the 17-year-old recovering quickly after being struck in the head by team-mate Meritan Shabani minutes earlier.