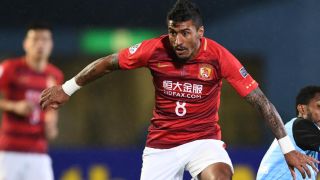 Paulinho insists Bayern Munich have not made an offer to sign him from Chinese champions Guangzhou Evergrande.

Widespread reports have claimed the Brazil international is a top target of Bayern boss Carlo Ancelotti and that a deal is close.

But Paulinho, who signed a new contract in January until 2020 after Guangzhou made it clear he was crucial to their plans, has stressed there has been no contact from the Bavarian giants.

"It is normal to have a lot of speculation in the football industry but I would like to clarify that I have not received any offers," Paulinho told reporters.

"As a player, I just focus on the games and concentrate on improving myself."

Paulinho, 28, has won two Chinese Super League titles and the AFC Champions League having impressed since signing for Guangzhou from Tottenham in 2015 and has returned to the Brazil squad since the appointment of Tite, his former coach at Corinthians.