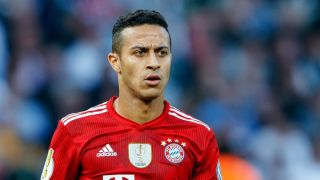 The Barcelona youth product has been linked to a return to Camp Nou during the close-season, with Real Madrid and Manchester City also said to be interested in the 27-year-old.

And with Javi Martinez, Arturo Vidal, Sebastian Rudy, Corentin Tolisso, Leon Goretzka, James Rodriguez, Renato Sanches and Thomas Muller all vying for a starting role it had been suggested Bayern could cash in.

However, Salihamidzic is adamant the Spain international is very much part of head coach Niko Kovac's plans.

"Of course we are planning with him," he told Suddeutsche Zeitung. "It will be an interesting battle for places with nine midfielders.

"It's the club's duty to the coach to put together a squad for where no discontent is pre-existing, and at the moment we have – more or less – nine central midfielders for probably only three positions."

Since arriving from Barca in 2013 Thiago has won five Bundesliga titles and two DFB-Pokals.