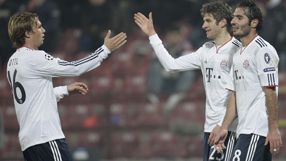 Club president Uli Hoeness sharply criticised coach Louis van Gaal before the game for running a "one-man show", with the Dutchman in complete control of the club and ignoring several players including Mario Gomez, who scored a hat-trick against Cluj.

Striker Gomez, defender Martin Demichelis and Ukrainian Anatoliy Tymoshchuk have been little used so far this season but were all in the starting line-up against Romania's Cluj as the German champions struggled with a long injury list.

Hoeness, who had been Bayern manager for 30 years before assuming the presidency, also said the Dutch coach was unwilling to listen to other opinions from within the club.

Van Gaal responded a day before the game, saying he had been surprised and disappointed by his president's comments coming at a time when Bayern were missing nine players through injury.

But their qualification with two Group E games to spare calmed tempers, especially as Van Gaal led them to the Champions League final and the domestic league and cup double last season, again after a rocky start.

"We are now in a phase where we can put the focus a bit more on the league. To show the competition we are strong," said club CEO Karl-Heinz Rummenigge, who had a talk with both men a day before the game to clear the air.

"There was no loss in (Van Gaal's) authority," said Rummenigge. "He should not worry about that at all."

The win for Bayern, who are seventh in the Bundesliga, 10 points off the top after ten games, put everyone at the club in a good mood.

"Tonight I am happy and Uli is happy so we will have a drink," said Van Gaal after the game.

The players, who had kept well clear of the row between the club's alpha males, said the qualification would now help restore peace.

"Our task is to get the results and the team did just that," said keeper Hans-Jorg Butt. "If we go on like that then everything will be calm again."