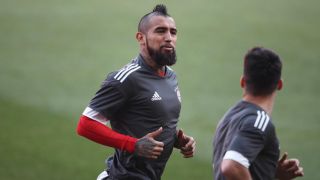 Bayern Munich have received a pre-season boost, with Arturo Vidal back running for the first time since undergoing knee surgery in April.

The 31-year-old Chile international stepped up his recovery on Thursday as he completed laps alongside team-mates.

His 2017-18 season ended when he was forced off 36 minutes into the first leg of Bayern's win over Sevilla in the Champions League quarter-finals.

Vidal faces a tough task to break back into a crowded midfield boosted by the arrival of Germany international Leon Goretzka from Schalke.

Running for the first time since his knee operation in April Welcome back,  July 12, 2018