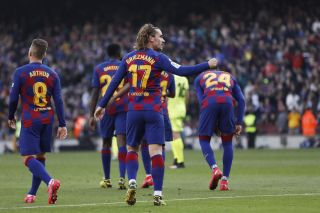 Antoine Griezmann believes Barcelona’s hard-fought victory over Getafe will help improve confidence as the LaLiga giants bid to get their season back on track.

Griezmann ended his league scoring drought when he put the home side ahead after 33 minutes before Sergi Roberto doubled their advantage before half-time.

But Barcelona’s resolve was tested when substitute Angel Rodriguez pulled one back for the visitors shortly after the hour mark.

Quique Setien’s side clung on to see out the match and move level on points with Real Madrid at the top of the table.

“Getafe are a team that play really well, they work a lot and they never give up,” Griezmann told the club’s official website after scoring his first league goal of the calendar year.

“We scored the first goal, got the second, but then after we scored the second goal we suffered a little bit, but we continued working.

“We need to get confidence, and confidence arrives with victories. We are improving and now we need to focus on the next league game and then the Champions League.”

Barcelona’s campaign has been blighted by a series of underwhelming displays and off-field dramas. Ernesto Valverde was sacked last month and replaced by Setien.

But they are now tied with Real, who host Celta Vigo on Sunday, at the summit of LaLiga, and they will return to action in Europe later this month with a two-legged round-of-16 tie against Napoli.

“I am happy with the work of the team and the victory,” said Setien.

“We had a really good first half. We past the pressure that was really high and really intense.

“We scored twice, and it is true we made some mistakes, but that can happen against a team that is this this strong, and this intense.”

Barcelona host Eibar in the league next weekend before travelling to Italy for the opening leg of their knockout clash against Napoli.