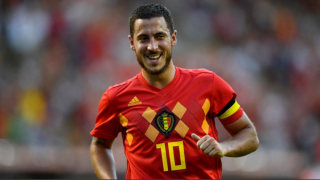 Eden Hazard has defended Belgium's performance against Panama and claimed this will be "his World Cup".

The Red Devils beat Panama 3-0 on Monday but it was not enough to prevent criticism from home, particularly after a goalless first half.

Chelsea forward Hazard feels expectations in Belgium are a little unrealistic, although hopes will be high of a better performance against Tunisia on Saturday.

He told Het Nieuwsblad: "People expect a lot but we have seen during this World Cup - except for the first match involving Russia - that almost all the matches have been won with either a one- or two-goal difference.

"Everyone always expects a lot from Belgium, that we always play perfect football, that we have 80 per cent possession, that we have 50 shots at goal and score 40 times!

"But it doesn't work like that. Sometimes you have difficult matches and you only win 1-0. The most important thing is that we win our games. We have so much talent in the squad that it's not surprising people expect a lot."

Hazard has been tipped to be one of the stars of the tournament and he believes it is the perfect platform to showcase his ability.

"I have the feeling this should be my World Cup," he added. "I am now 27 years old, playing my second World Cup and have had a strong season individually.

"All the elements should come together to play a nice tournament."

Belgium defender Thomas Vermaelen has resumed training and could be fit for the final Group G game against England on June 28.

Vermaelen was named in the squad by coach Roberto Martinez despite sustaining an injury playing for Barcelona on May 13.

It is unlikely he will be risked against Tunisia, an opponent Martinez is wary of.

The former Everton boss told FIFA.com: "They have a lot of bravery and they're very dynamic.

"The players have a good understanding between each other and they can bring energy and intensity on counter-attacks. They play direct, efficient football."

Tunisia were undone by a late header from England captain Harry Kane in their opener, going down 2-1 in Volgograd, but they put up some stout resistance despite being bossed territorially by the Three Lions.

They will have to make at least one enforced change against Belgium, with goalkeeper Mouez Hassen having returned home to undergo surgery on an injured shoulder.

The burly Manchester United striker netted twice in the defeat of Panama and one more goal will make him the top-scoring Belgian in major tournaments. Lukaku has five, just one behind Jan Ceulemans.

The all-action midfielder was not able to influence the game the way he would have liked against England due to a lack of ball possession but will again be tasked with dictating the Tunisia attack against Belgium.

- This will be the fourth meeting between Belgium and Tunisia, with both nations winning one game and sharing one draw.
- Belgium are unbeaten in their last 10 World Cup group games, winning the last five in a row (W5 D5 L0).
- Each of Belgium's last 11 World Cup goals have come after half-time.
- Tunisia are winless in their last 12 World Cup matches (D4 L8), since beating Mexico in their first ever match in the competition (3-1 in 1978).
- The last team to have a longer winless run in the World Cup than Tunisia's streak of 12 was South Korea (14 games between 1954 and 1998).
- Tunisia have scored with their only shot on target so far at this World Cup.