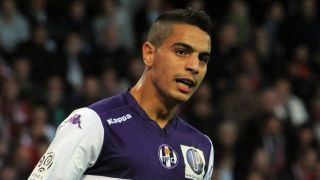 Wissam Ben Yedder has moved to end speculation on his future by stating his intention to stay with Ligue 1 strugglers Toulouse until the end of the season.

The striker has been the subject of reported domestic interest from Lyon and Marseille during the January transfer window and head coach Dominique Arribage refused to rule out a sale when asked about Ben Yedder's future earlier this month.

However, Ben Yedder - who has also been linked with Premier League side Tottenham - is planning to stay put for now and vowed to do all he can to help Toulouse, who are 19th, retain their top-flight status and beat Paris Saint-Germain to reach the Coupe de la Ligue final.

"We have had discussions with the president and the club and we have decided, by common accord, that I will stay at Toulouse FC until the end of the season," he wrote on Twitter.

"I will continue to give everything for a club that has given me a lot, in order to keep us in Ligue 1 and try to reach the final of the Coupe de la Ligue."

Ben Yedder has hit 13 goals in all competitions this season, with seven of those coming in the league.

Toulouse travel to Monaco in Ligue 1 on Sunday, before visiting the capital for their Coupe de la Ligue semi-final versus holders PSG on Wednesday.