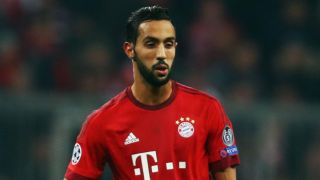 Medhi Benatia is undergoing a medical in Turin ahead of his switch from Bayern Munich to Juventus.

Benatia is expected to join the Serie A champions on an initial season-long loan deal that can become permanent for a fee reported to be in the region of €20million fee in 2017.

Juventus tweeted pictures of the defender being greeted by a crowd of fans as he arrived to compete tests at the club's J-Medical centre on Thursday.

Benatia previously starred in Serie A with Roma before joining Bayern in a €26m deal in 2014, although he struggled to find his best form and was restricted to 11 starts for the Bundesliga winners last term due to injury.

The 29-year-old provides Juve with a defensive reinforcement following the departure of Uruguay international Martin Caceres, who left when his contract expired last month.