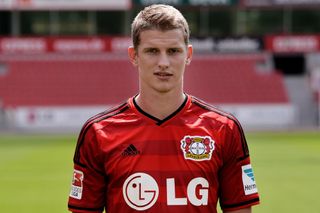 The midfielder has been absent since suffering the injury during a training session with Germany ahead of the World Cup in May.

Bender was omitted from Joachim Low's final 23-man squad and had to watch from home as his team-mates were crowned world champions for a fourth time.

The 25-year-old missed all of Leverkusen's pre-season as he recovered from the injury, but head coach Roger Schmidt revealed he has now returned to full training.

Along with new signing Kyriakos Papadopoulos, Bender could feature at Signal Iduna Park on Saturday.

"We've still got two days to go and we'll see what happens in training and decide whether or not they make it to the squad."

Bender made 29 appearances for Leverkusen last season as they finished fourth and qualified for the UEFA Champions League play-off round.