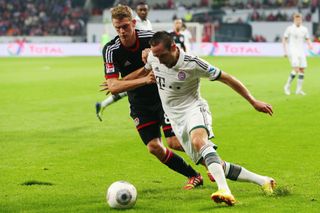 The 24-year-old suffered a torn quadriceps muscle in the closing stages of Leverkusen's 1-1 draw with Bundesliga leaders Bayern Munich on October 5.

Bender missed three games for his club, as well as Germany's final FIFA World Cup qualifiers, as a result.

But he could now be back in contention for Saturday's trip to the Bundesliga's bottom club, Eintracht Braunschweig.

"But I have put my return off long enough and I'm ready to play again."

Leverkusen coach Sami Hyypia will be buoyed by the midfielder's recovery, but he still has concerns elsewhere in his squad.

Star striker Stefan Kiessling did not participate on Tuesday's session, due to a cut on his foot sustained in the weekend's 2-1 win over Augsburg that required five stitches.

Leverkusen are part of a trio of clubs currently clear at the top of the Bundesliga after nine rounds. They sit third, level on points with Borussia Dortmund, and just one behind league leaders Bayern Munich.