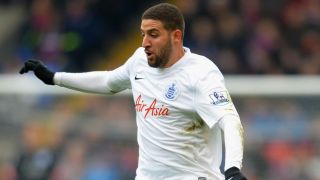 Adel Taarabt has signed a five-year contract with Portuguese champions Benfica after reaching an agreement to terminate his QPR contract.

Enigmatic Moroccan playmaker Taarabt hardly featured for Rangers last season as they were relegated to the Championship.

And, after six years at Loftus Road, the 26-year-old has now moved on to Benfica on a free transfer.

QPR confirmed Taarabt's contract had been cancelled by mutual consent, with Benfica announcing his arrival on their Twitter account.

Taarabt had not played regularly for QPR since the 2012-13 campaign, which also saw them relegated from the Premier League.

The former Tottenham man spent the first half of 2013-14 on loan at Fulham, before another temporary switch to Milan for six months.