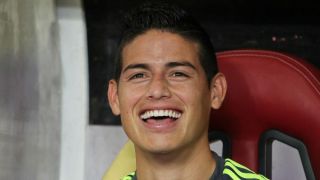 Rafael Benitez is happy with James Rodriguez, despite the Real Madrid attacker's brush with Spanish police on Friday.

The Colombian was reportedly chased to Madrid's training ground by police, who accused Rodriguez of driving at 200 kmh.

Rodriguez is expected to be fined for his indiscretion and the issue fits in with a frustrating season individually, which has seen the former Monaco man struggle to force his way into Benitez's plans.

However, the Madrid coach was quick to stick up for his player when quizzed on the incident on Saturday.

"It's a private matter, he explained to me what happened," Benitez told a media conference.

"He's a fantastic kid, a serious kid. He has given us a full explanation."

Isco has also struggled for regular action this season, but Benitez is happy to have the playmaker in reserve.

"I cannot play all of my players," Benitez added. "When one stops playing you always ask me why.

"Yesterday I was chatting to him, he trained very well."