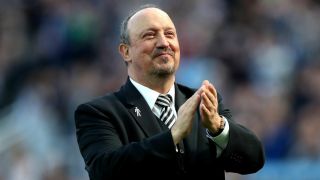 Newcastle United manager Rafael Benitez called for the club's board to align their ambitions with those of the supporters after his team ended the season with a 3-0 home victory over Chelsea.

The result gave Benitez revenge for the 3-1 defeat Newcastle suffered at Stamford Bridge in December 2017 and he called for owner Mike Ashley to invest in his squad this summer.

"It was a great way to end," he told reporters. "It was a perfect day for the fans and for everyone as it was a great atmosphere.

"I said before the game it is not about finishing 10th. We want to compete and with the right quality and at the right level.

"The players have done so well. We have to have confidence in this team."

The 58-year-old hopes to remain at the club next season, and said his squad would need reinforcements, especially with goalkeeper Martin Dubravka, striker Islam Slimani and winger Kenedy all set to return to their parent clubs when their loan deals expire.

"I still have one year left on my contract," he said. "The fans have ambitions, we have ambitions and if everyone has the same the potential is there.

"We have a couple of players on loan, some leaving so we have to sign players.

"You need competition to approach any game you want to win. You have to have a squad to compete."