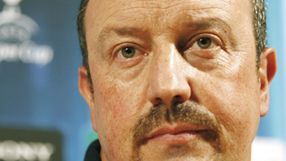 Benitez was reacting to a statement made on Wednesday by Hodgson, who said he was upset after hearing that Inter were planning a 13-million-pound bid for Liverpool's Dutch international forward Dirk Kuyt.

GEAR:Inter Milan shirts available here and get 10% off to boot. Treat yourself

Benitez told a news conference ahead of Friday's European Super Cup meeting with Atletico Madrid that he was happy to be relieved of any worries about player recruitment, which he left to the club's management.

"I am fine like this - I can focus on my work on the pitch and that is all," he said. "I am the coach not the manager."

Pressed to respond to Hodgson's comments that he had signed an agreement "not to poach players", the Inter manager replied: "I am the coach and I cannot sign players - that is for the technical director and the chairman."

Benitez then said he would talk only about Friday's season curtain-raiser between his side and the winners of the Europa League trophy.

Hodgson, addressing the media in Trabzon, Turkey, where Liverpool play Trabzonspor in the second leg of a Europa League qualifying-round play-off, said: "You have to remember that when Rafa Benitez left Liverpool he signed an agreement he would not poach any of our players and I think Dirk Kuyt falls into that category. We would not welcome any offer."

Benitez, whose father was an Atletico Madrid fan, said he agreed with his friend and counterpart Quique Sanchez Flores that Friday's game was evenly poised.

"It will be a tough game for us, they are a very talented team with quality players and they have great offensive potential," he said.