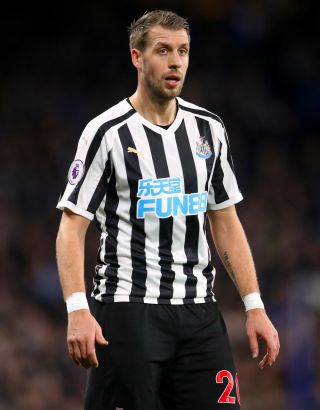 Newcastle boss Rafael Benitez is hoping defender Florian Lejeune will bounce back quickly once again after undergoing surgery to repair his left knee.

The 27-year-old Frenchman had an operation in Rome earlier this week on the ruptured anterior cruciate ligament in his left knee, an injury sustained during the 1-0 Premier League defeat to Crystal Palace at St James’ Park on April 6.

Lejeune was back on the pitch within five months after suffering a similar injury to his right knee in August last year and having sent him back to the same surgeon, Professor Pier Paolo Mariani, Benitez is hopeful that he will make an equally swift recovery.

The 59-year-old Spaniard said: “He had the operation. I was talking with the doctor and everything has gone well, as we were expecting.

“And now the timescale… we think that within a couple of months, we will see how he is progressing, like we did the last time, and then we will see how long it will take.

“But in this case, we have to give him time and see how everything is going on.”

Lejeune is expected to be out of action until October, but the process of working his way back towards full fitness is already under way.

Benitez said: “We sent him to Rome with a specialist that is quite good. He did a great job with the other knee and we are sure that he will do the same with this one.

“We were doing our research about injuries after an operation, and if you have both knees, the stats say it will be very hard for him to have the same injury. Now he should be stronger.”

In the meantime, Benitez will turn his attention to Saturday’s league clash with Southampton, in which a win for either side would almost certainly guarantee their top-flight survival, although he is still awaiting answers over his own future with no contract extension yet agreed.

Asked if there had been any developments, he said: “We are at the same point, no news.

“I finish my contract on June 30. I am a professional, I want to do well and the first thing is to win against Southampton in the next game.”