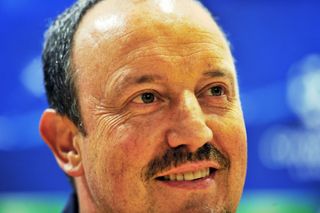 Napoli's 4-0 thumping of Livorno left them second in the table - two points behind Roma, who boast a perfect record after seven games.

After seeing his side win comfortably with skipper Paolo Cannavaro an unused substitute, Benitez underlined the importance of depth as the season advances.

"What's important is the squad and the squad will make the difference if we want to make a good performance until the end of the championship," said the Spaniard.

"When I decide the formation, I take into consideration what I believe will be the most important skills for the match. Today I thought the pair of (Miguel) Britos and (Federico) Fernandez (in central defence) could be perfect.

"It could also be Paolo Cannavaro or any other player. Cannavaro is a professional player and works very well and I'm very satisfied with his performance, but I chose Fernandez and Britos for this match.

"I don't have any problem when I choose one player or another."

The former Liverpool and Inter manager went on to praise the attacking nature of his side's display.

"We faced this match with the idea of trying to be more offensive," he said.

"We had luck and thanks to a counter-attack we managed to score the first goal and this changed the situation because the opposing team had to risk whereas we had to control the match in a different way.

"But the original idea was to attack and score a goal. I'm very satisfied with the performance because the team showed their personality and scored four goals without conceding any.

"We made a good performance, but of course we can still improve, therefore we'll keep on working hard."