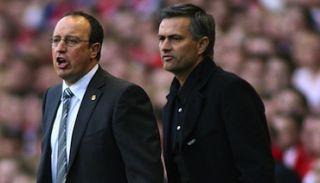 The Spaniard, still unpopular with a section of Chelsea's support from his days with Liverpool, has impressed as the club's interim manager and victory at home to Tottenham Hotspur on Wednesday would all but secure a place in at least the qualifying round for the Champions League.

"You know that next year another manager will be here and I think every one knows who will be here," Benitez said in a televised news conference, when asked if his success at the club could lead to a longer stay.

Self-proclaimed "Special One" Jose Mourinho is the hot favourite to return to Chelsea from Real Madrid, having won two Premier League titles for the club during his first stint in charge which ended in 2007.

"It's not my concern what will happen here next season, I'm just concentrating on doing my job," Benitez, who will lead the side against Portuguese club Benfica in the Europa League final in Amsterdam this month, said.

Interim manager since the sacking of Roberto Di Matteo in November, Benitez said he would not be considering his next move until his Chelsea mission was complete.

Chelsea will have Eden Hazard available after he missed Sunday's 1-0 win at Manchester United through injury.

Tottenham have not won a league game at Chelsea for 23 years and defeat would leave them six points behind Chelsea and two points behind fourth-placed Arsenal with two games remaining.

"Both teams will want to win, it's a game we've been looking forward to and we'll certainly be going there to win," Tottenham defender Michael Dawson told the club's website.

"We'll have to earn it. We'll go there full of confidence and hopefully get the three points."